A reflection on my vlog for ALM102 Assignment 1- video exercise.

Choice of subject
I was prompted to use the subject “Why study?” by my brother-in-law who asked me why I was bothering to attempt another degree at the age of 58. His question puzzled and shocked me but also helped me articulate why the Bachelor of Communication (digital media) at Deakin Cloud campus is so important to me.

Technical
I wrote a precis of the vlog rather than a script because I wanted a more natural feel. In practising the vlog, I found I hade made my topic too wide for the time available so reduced it to three main points.

I planned the set carefully. Originally I wanted to film outside but the lighting and shadows were too harsh. I tried putting a painting behind me against a plain wall inside but the glass in the painting reflected my lighting and was distracting. Finally I chose a sheet taped to the wall to give a soft background and experimented with several lights to reduce shadows and help my skin colour look natural.

I wanted to look professional but relaxed so chose work clothes and tried several combinations before I was satisfied with the combination of colours against the background and my skin.

I used a Joby gorilla pod with iPhone attachment mounted on the back of a chair to achieve the frame I wanted. It also meant I could sit down and feel more relaxed.

Using landscape mode, I felt I needed something else to fill the frame. After much trial and error, I decided on a clipping of a native plant from my garden that hinted at the red in my shirt. 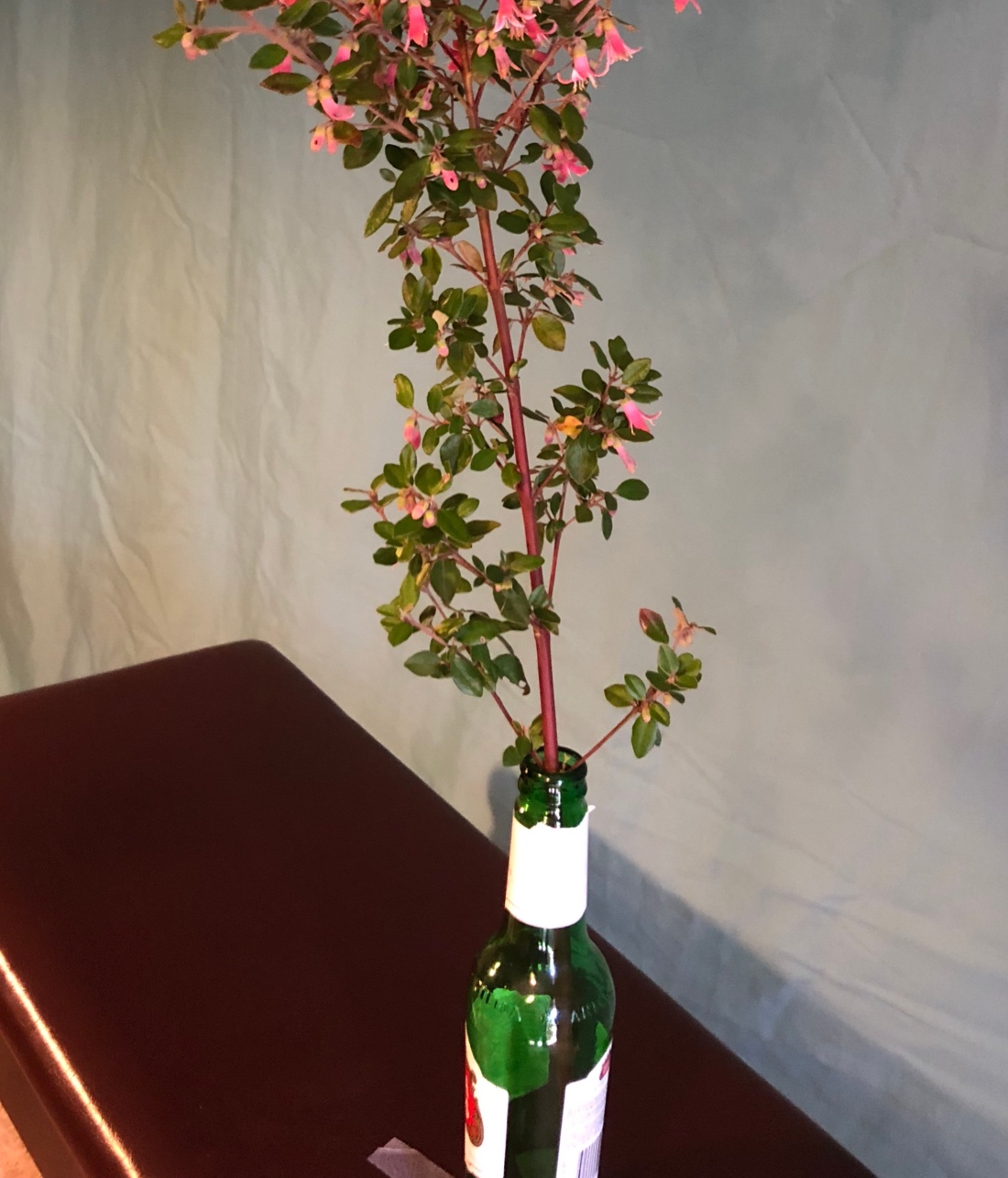 The flowers were unobtrusive, reflected my love of nature and added some visual interest. They helped avoid the “head on a stick” look of simply having me in the middle of the frame with only background around me. The beer bottle vase and sticky tape prevented wobbling.

I engaged with the audience by looking at the camera rather than at the screen of the iphone, maintaining eye contact throughout. I used Dylan Hornsby’s trick of clapping at the beginning and end of the video to help me identify where I wanted to edit so I wouldn’t be seen turning the camera on and off in-shot. This was the only editing I did: edited vlogs tend to have annoying little jumps in the speakers’ position and I haven’t learned to manage this yet.

This meant I had to film the vlog in one sitting, requiring many rehearsals on and off camera for me to speak confidently without tripping over my words in an awkward way.

The audio quality was good for the inside shooting location. I banished my dogs to the sun and locked my cat in a bedroom to prevent animal vlog-bombing and made sure my phone and iPad were on silent. I tested the audio against my position in front of the camera until I felt the balance was good.

Learnings
Planning was essential. I was surprised at how much planning and experimentation was needed before I came up with the look and feel I wanted, let alone a topic and script. My original plan was modified several times as I found what did and didn’t work on camera.

I became aware of some distracting habits I have of licking my lips and sweeping back my hair when speaking so had to practice these away.

I like speaking on camera. Making this vlog was fun and I look forward to learning new techniques, play with creative approaches and add audiovisual interest.